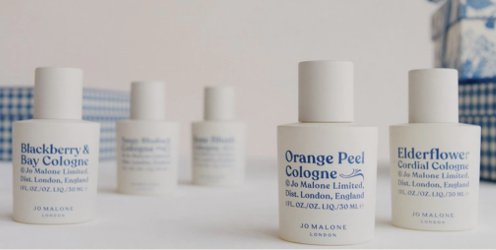 Inspired by the British love of jam making, our perfumers have created five unique fragrances celebrating the fruit flavors of the British pantry. To capture the vibrant scent of summer fruits, we’ve steam-distilled fruits and berries to extract its all-natural flavor and create these fine fragrances.

Orange Peel ~ “Marmalade making, a most British of traditions. Orange peel simmers on the stove, its zesty aroma and bitter bite tantalising the senses. Warm woods are blended with orange to create a refined, golden fragrance. Quirky natural rhubarb adds an enticing appeal to this fresh take on the classic marmalade.” Developed by perfumer Marie Salamagne, who notes…

Orange Peel took a long time to perfect as it required striking just the right balance between the juiciness of the fruit and the bitterness of the rind. We used natural orange together with the orange molecule Sinensal, which acts like a booster for orange to last longer, preserving a lovely zesty note all the way to the bottom of the fragrance.

Tangy Rhubarb ~ “The unmistakable tang of unruly rhubarb plucked from the overgrown garden. Its bright and striking stems fill the bustling kitchen. Rhubarb brings a characterful heart to this eccentric fragrance, complemented by zesty orange and an elegant note of cedarwood.” Tangy Rhubarb was developed by perfumer Nicolas Bonneville, who notes…

We also worked with warm woods and clary sage to add elegance and refinement to this cologne. Our wonderful rhubarb fruit extract gives things a unisex quality and adds a hint of bitterness that works so well.

The Jo Malone Marmalade Collection fragrances are available in 30 ml Cologne, $74 each. A  coffret with all 5 in a decorated tin is £275 (it has not yet appeared on the US site).

Nurses Are Dying From Suicide at Higher Rates

How to Handle Emotional Vampires