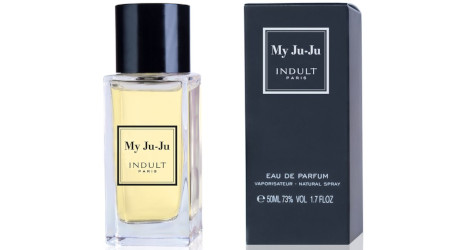 After more than 3 years of close work on the formula with the wonderful perfumer Nathalie Feisthauer, Indult Paris opens a new chapter of our history with our new perfume My Ju-Ju.

By definition, Juju is an object that has been granted magical powers and a certain type of energy. According to the Juju philosophy, two entities that are in contact obtain similar properties that will remain even in separation.

This is easily translated into bonds between people and further reinforced in our case, as the word Ju-Ju has got a very personal touch to us: Ju-Ju is the British diminutive of the name of our brand owner’s child who wished to create a scent that would be their perfect fit. With these two notions intertwined, essentially, My Ju-Ju for us stands for ‘My magic’.

Having been driven by a need for some day-to-day magic to be worn on skin, we worked on a formula that would be bright and vibrant, yet slightly enigmatic and mysterious. Its’ opening with crisp white florals and fresh citrus notes are as wonderful as the deep coffee and vanilla nuances that are hidden in the base of the fragrance. [sic]

Millions of Tons of COVID Masks, Gloves Will End Up in Oceans