Etat Libre d’Orange The Ghost in the Shell ~ new fragrance :: Now Smell This 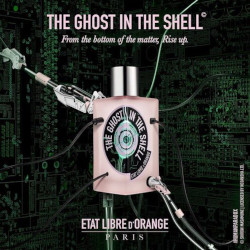 By mixing biotech and natural materials, this perfume silently celebrates the wake of the future and also whispers of a day to come, by providence or chance, when humanity is reunited and organized. A day when all consciousness is summoned by the infosphere to constitute a superior being and pass from the inert to the living. As the molecules assemble to make the living, we will then make a qualitative leap that becomes the starting point and arrival of transhumanism.

This perfume is the future. It comes to us from the 20th century.

Ghost in the Shell, a perfume that speaks of the human phenomenon and its paradox, a perfume to wear on oneself ab libitum, at one’s pleasure. A perfume as a propagation towards the other, that makes you the axis and the arrow of evolution; modern, indeed! From the bottom of the matter, rise up.

Etat Libre d’Orange The Ghost in the Shell is available in 50 and 100 ml Eau de Parfum.