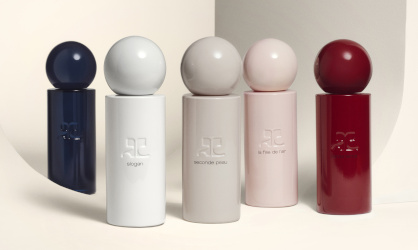 The base accord [for all five fragrances] is intoxicating ambroxan or ambrox, known for its addictive power and evocation of skin odour. Nicolas Di Felice chose it to be the keystone of the House’s olfactory universe to bring body, volume and persistence to these five perfumed creations.

L’Empreinte (above far right) ~ [reportedly, the juice is unrelated to the original] “Was originally “Empreinte”, the first fragrance from the Courrèges house. Part of the House heritage, the 2021 version of the legendary “empreinte” symbolises a removed emotional space-time. It evokes a relationship between two beings who meet, which endures in an olfactory setting: L’empreinte. // Chypre-fruity. An updated chypre structure. A bergamot-patchouli accord with gourmand and amber accents.”

La Fille de L’Air (above second from right) ~ [see 2015 announcement; it is reportedly the original fragrance made EU compliant.] “A female icon of the House, La fille de l’air reveals all the freedom of expression, movement and life that Courrèges gives its creations. With its rush of lightness and trail of light, La fille de l’air inspires as much as it fascinates. // Floral-fruity. In its original, unaltered version, lights up with its musky orange blossom.” Additional notes include neroli and white musk.

Slogan (second from left) ~ [Intended as the house signature.] “The scent of a beating heart. A fragrance with an evocative name: Slogan. The energy of free, moving bodies, coming together and pulsing in unison: this is the radical yet romantic aesthetic of the emotion that Nicolas di Felice, Artistic Director of the House, wanted to highlight. A creation marrying physical pulsation and olfactory addiction. // Woody-musky. Created by master perfumer Annick Ménardo, this fragrance has a surprising contrast, opening with an airy, sheer note of lively, fresh juniper berry, enhanced by a base tinged with musky ambrox.” Additional notes include white musk.

C (above center) ~ “C is the Courrèges initial but also part of the “AC” House logo. This letter is striking with its curve and its simplicity. Symbolising a universal fragrance, the new impetus of a couturier-perfumer. // Floral-woody. The indulgent purity of clean laundry, energized by textured jasmine.”

(via courreges, additional information via fr.fashionnetwork)

Better Way to Fight Breast Cancer That Has Spread to Brain